In this third book of the Tales of Starlight series, Adrian Masters continues his relentless march toward the bitterly cold Northlands of Starlight. Ravaged by a deadly disease and accompanied by two children, Adrian carries Marcelle in a vegetative state, hoping Alaph, king of the Northlands, will supply a way to reunite her near-death body with her wandering spirit.

Time is of the essence. Invading soldiers from Major Four are marching toward the Southlands village to do battle against the dragon slave masters, but two great dangers await—the inescapable disease and the unpredictable Benefile, ageless and mysterious white dragons who will kill any infected humans.

All the while, Drexel, the murderer of Marcelle’s mother, has taken on an impervious disguise as a male Starlighter and is using hypnotic powers to gain control of Mesolantrum with his sights set on the entire kingdom. Adrian and Marcelle must battle to free the slaves on one world and protect their own world from Drexel’s malevolent plan or else the freed slaves will return to Major Four only to find another slave master. Performing both tasks seems impossible.

Be the first to review “#3 Exodus Rising” Cancel reply 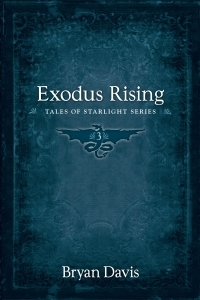