The Candlestone is book #2 in the Dragons in our Midst series. Recommended for ages 11 and older.

Take note that the hardcover edition is an older edition, not the newest printing.

The Candlestone is a contemporary fantasy novel, the second of a series of books for pre-teens and young adults. Along with a unique blend of fantasy and real life, it delivers action and inspiration through the adventures of two young teens, Billy Bannister and Bonnie Silver.

Billy and Bonnie wonder about a number of unsolved mysteries. What was the strange book that the dragon slayers used to summon a dragon? Where is the magnificent sword that seemed to disintegrate the evil Devin? And what happened to The Candlestone, that strange gem, always absorbing light and with it the powers of dragons or dragon children within its sphere of influence?

The Candlestone not only absorbs light, it captures and holds encoded light, including transluminated humans, people who have been transformed into light energy by Excalibur, King Arthur’s great sword. When Bonnie enters the stone herself, she learns that many disembodied souls have fallen prey to the gems powers, but no one has ever escaped.

The two teens face their greatest fears, and they learn to use their strengths, both innate and newly found, as they battle powerful enemies, ancient fiends from times long past, and the horrors of the blackest of prisons, captivity with the walls of unearthly darkness, the crystalline tomb of The Candlestone.

Take note that the hardcover edition is an older edition, not the newest printing.

Be the first to review “#2 The Candlestone” Cancel reply 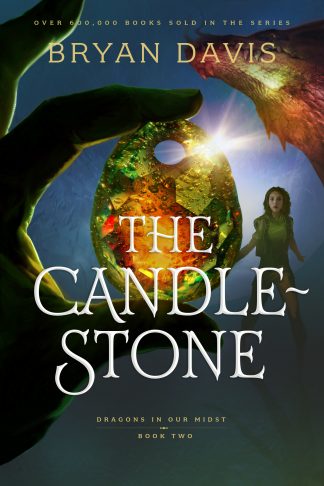