Noble Imposter is book #2 in the Cantral Chronicles trilogy by Amanda L. Davis, daughter of Bryan Davis. Recommended for ages 12 and older.

13 in stock (can be backordered)

Posing as Her Enemy
Risking Death at Every Turn

With microchips implanted in their skulls at birth, the slaves of Cantral and Cillineese have labored under the tyrannical rule of the nobles and their computers for decades. Monica, a noble who avoided the implanting and escaped a death sentence at the age of four, is now sixteen. After successfully risking life and limb to free the inhabitants of Cillineese, she faces an even bigger problem. The computers still rule the rest of the world, and those who disobey are terminated without mercy.

Now she must journey to Cantral and take the identity of her dying cousin, Amelia, to infiltrate the Nobles’ world in the guise of a teenager who is a master computer programmer. Because of her childhood living among the slaves of Cantral, Monica knows nothing about programming and must improvise to stay alive.

The fate of millions rides on Monica’s shoulders. As the only chip-less person in the world, she must convince the Council of Eight of her innocence, destroy the computers, and free the world from the nobles before they discover her ruse. 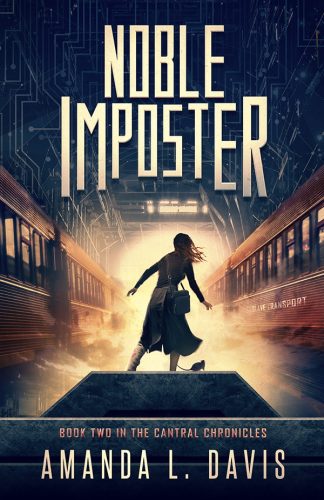